These links are provided for your reference only. The opinions expressed are those of the participants. We assume no responsibility for their content. 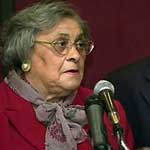 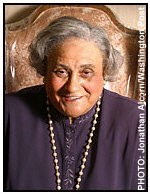 representing the world of sports & entertainment

Essie Mae Washington-Williams was born in Aiken, South Carolina as the daughter of the late Sen. (James) Strom Thurmond (1902-2003) through a liaison with Carrie Butler, an African American domestic who worked in his home. Although Thurmond privately acknowledged Essie Mae as his daughter, she was raised in Pennsylvania by an aunt and uncle. She did not meet her biological father until 1941, when she was 16 years old.

A few years later Thurmond would be elected Governor of South Carolina. While in office, he ran unsuccessfully as a States Rights candidate for President of the United States in 1948. He was appointed in 1954 as a Democrat to the United States Senate to complete the term of Charles E. Daniel, who resigned, only to resign himself on April 4, 1956. He was again elected as a Democrat in November 1956 to fill the vacancy caused by his own resignation. On September 16, 1964, he changed from the Democratic to the Republican Party and would serve until January 3, 2003. Upon his retirement a few weeks after his 100th birthday, he was the oldest person ever to serve in the U.S. Senate.

This was a period of tremendous social and political change. During that time, Sen. Thurmond was a highly controversial figure. In 1948, he abandoned the Democratic Party and decided to run as a third party candidate for President of the United States, almost costing incumbment President Harry S Truman the election.

Meanwhile, Essie Mae went on with her life. She married, had children and taught public school for 27 years.

Only in the wake of Sen. Thurmond's death on June 26, 2003 has Essie Mae's relationship to her biological father become widely known. To view the official press release of her announcement, click here. You may also view the text of Mr. Wheaton's introduction. You will need Adobe Reader to open both documents. If you don't have Adobe Reader, please click on the button below to download.